Buddhism has been practiced in Thailand, Cambodia, and Laos for nearly 2000 years, but it varies widely from place to place both in its adherence and outward demonstration.

Many Buddhist Festivals take place on the day of the full moon in November.

In Luang Prabang Temple courtyards all over the city are transformed into spaces of lights and candles. The young monks at Wat Nong Sikhounmuang set up a grid of candles in the courtyard as can be seen in the images below. Temples, homes and businesses are decorated with lighted paper lanterns, many in the shape of a 6-pointed star and the ongoing construction of illuminated boats and floats that would later form part of a parade. The procession of over 50 floats makes its way down the street to the Mekong River where the dragon and other forms of lighted boats are launched. The temple images are from Wat Nong Sikhounmuang, Wat Sene, Wat Xiengthong and Wat Sibounheuang (a Wat is a Buddhist temple or monastery)

In Vang Vieng people make their way down the river bank to the water’s edge to send off small floating candled platforms, purchased on the street, into the flow of the river. The setting off of the candles is, apparently, a symbolic cleansing of the soul by casting out bad spirits, impure thoughts and actions. Small boats known, as 'Krathongs', are made from a banana tree trunk, acting as a base, and decorated with various flowers and candles. At the water's edge, prayers are said over the 'vessels' before they are set off to float down the river Mekong.

In Thailand the festival is linked with the nationalistic spirit and temples are adorned with coloured ribbons, coloured banners and flags, as can be seen in the images of Wat Phra Kaew 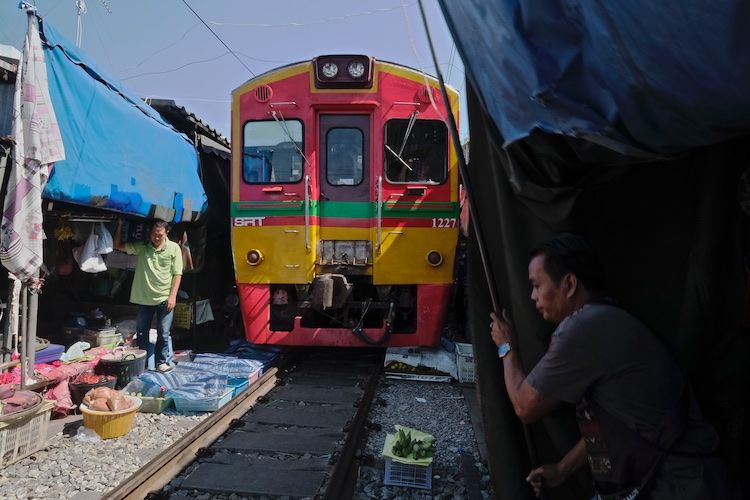